2018 was my first Driven Edmonton event and it had left a memory of a warm parking garage full of enthusiasts, DJ’s, a variety of vehicles, quality builds and it left me looking forward to 2019’s offering. It is now 2020, and another Driven event has been forced to go virtual with Calgary and Toronto already in the books.  The great thing about photography is the ability to capture moments that can always be reminisced and remember what was and also having that feeling of anticipation for what the next event will provide.

Once again Grant MacEwan set the stage for Driven and as I made the trek to the University I found myself stopping and capturing some shots on the way.   Parked not too far away was this BRZ from Calgary that has been at previous Driven events and this time the owner appeared to be content with spectating rather than participating.  As I got closer, a Ferrari F430 owned by TT Automotive, was equipped with classic TE37’s.  Usually you see exotics with ADV.1 or Pur wheels but this time the owner opted to add some Japanese styling with Volks.  I will be honest, I did lower the car in photoshop and maybe it will convince TT to make it a reality. 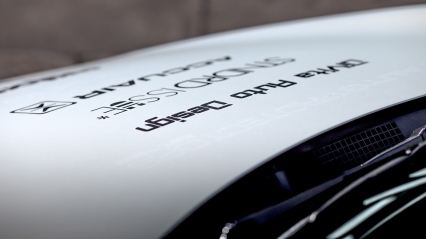 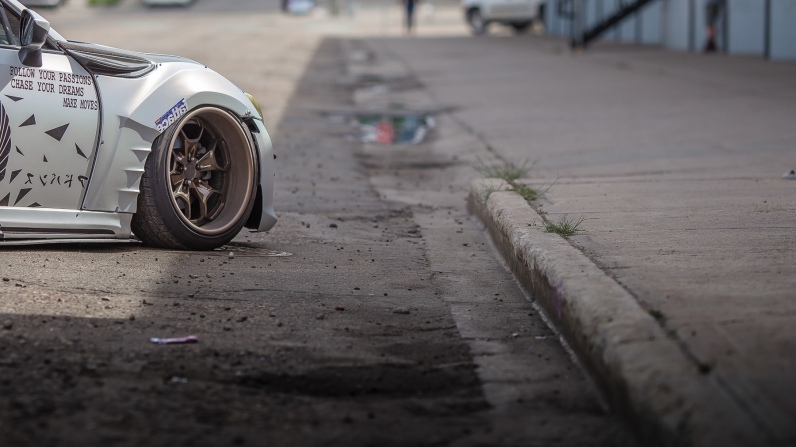 Time to enter the depths of the parking lot where multiple Euro cars were grouped together including a slammed Audi wagon and the 7 series “Deathrow” BMW I had seen previously in Calgary. 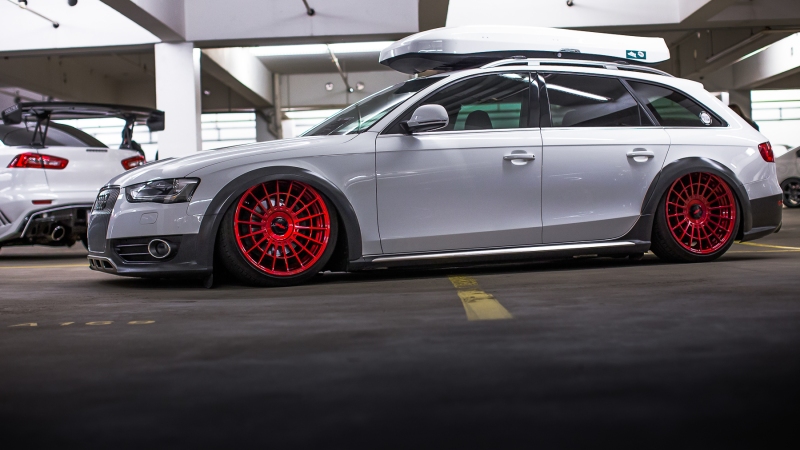 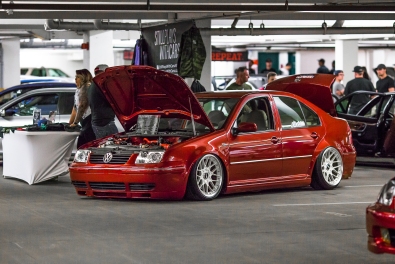 Happy Endings had another good showing with this heavily modified FRS with an RB30 transplant and Work Meister M1 wheels.  One thing I appreciated about this build was how the body flares were molded onto the car rather than the rivets being visible.  Definitely one of the premiere builds in attendance. 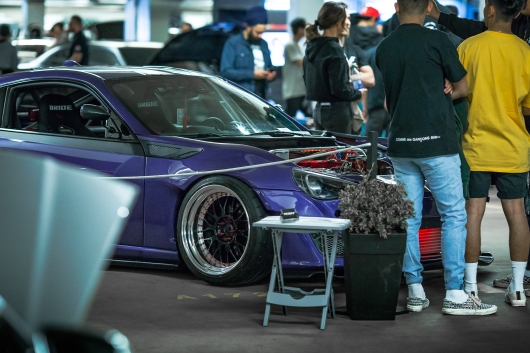 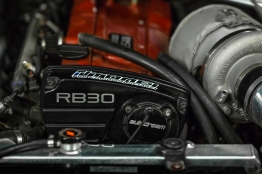 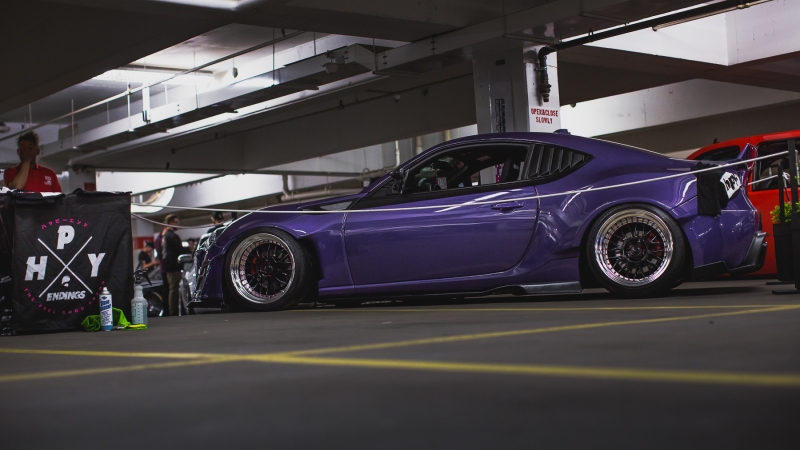 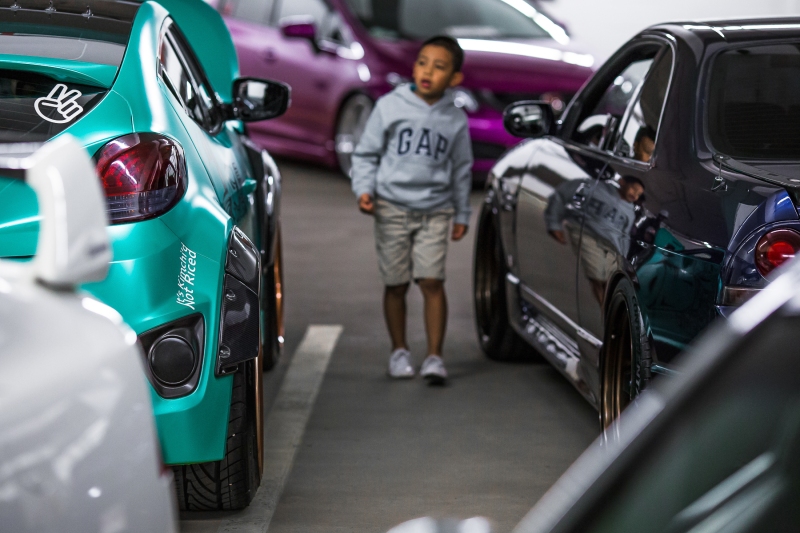 Custom stereo setups and air ride installs were apparent with owner’s popping their trunks to showcase the configurations.

Now this was not something I expected to see since the Mk3 Supras are not as popular as the Mk4’s.  With drag slicks mounted on the back, this Toyota meant business with a custom badge mounted to the front “Angry7M”. 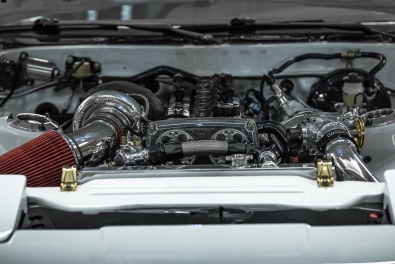 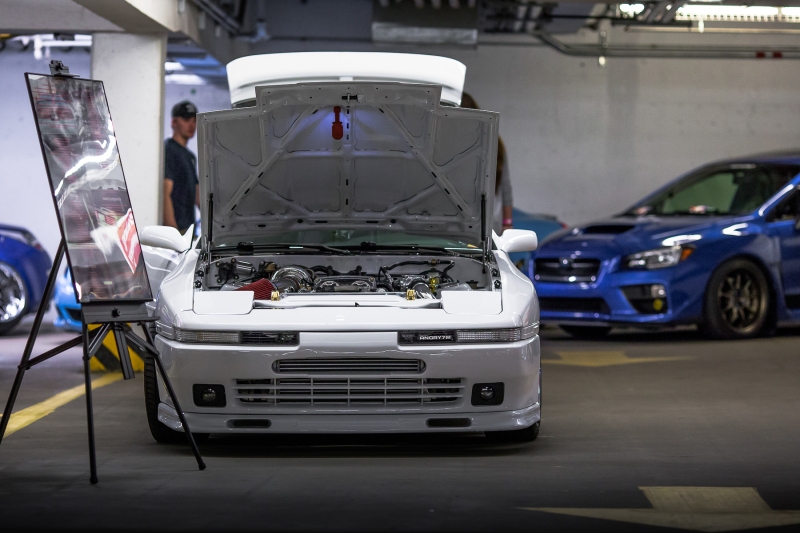 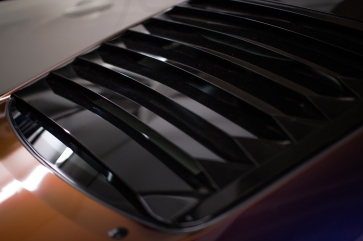 Driven would not be the same without this Rocket Bunny S13 equipped with Work Vs-XX and a Voltex wing.  The gold decals and blue paint flow well. 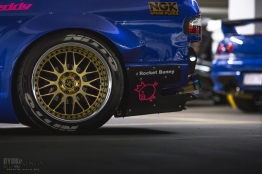 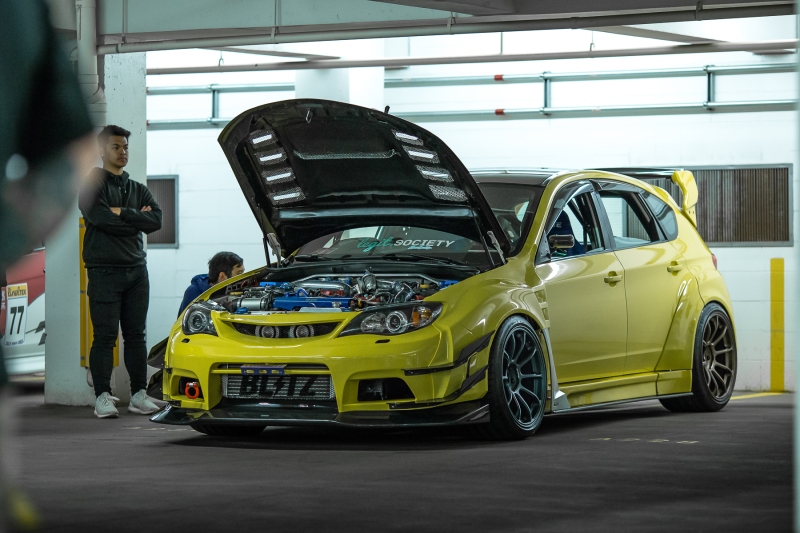 In attendance this year were several Fd3s Rx7’s.  From an orange Veilside tribute to Han’s car in Tokyo Drift, a custom wide black Rocket Bunny and finally an RB26 swapped track inspired build, the cars just kept getting more wild. 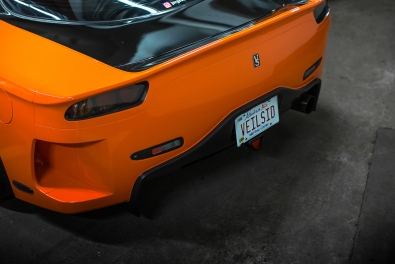 What would an underground show be without the partial collection of a locally owned Fast and the Furious enthusiast. One day I hope to see all of this collection together. 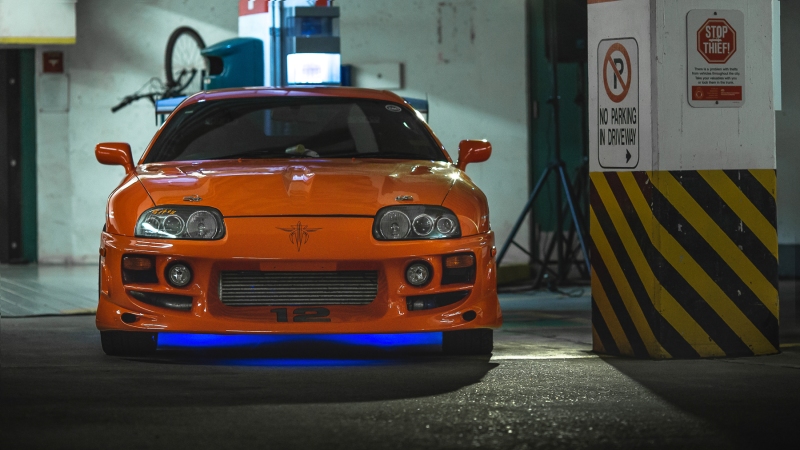 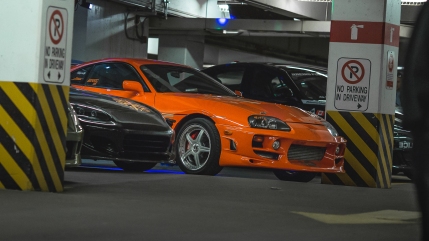 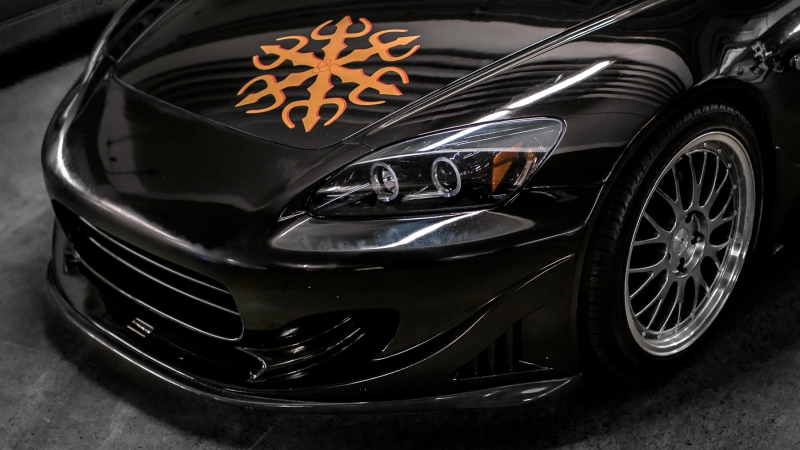 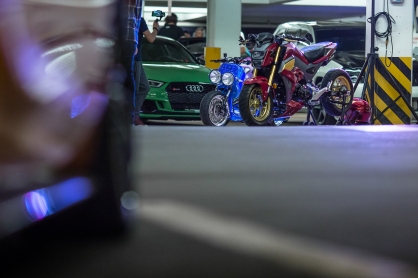 3 RWB Porsches in attendance would normally be enough to draw a crowd but there was a fourth that was soon to be unveiled later that afternoon. White, Grey, Black and the soon to be revealed Blue were the colors accenting the wide flares and Work Wheels.  What would you choose? Cabriolet, Targa, or Coupe? 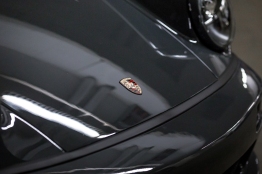 I recall mentioning variety and this 64 Impala was complete with a refreshed interior, motor, 13 inch Daytons and custom matching luggage in the trunk.  I thought the blinds were a nice touch as you looked through the back window.  I am a blue person but the 2 toned brown paint flowed well on this build. 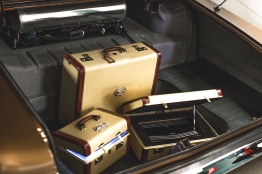 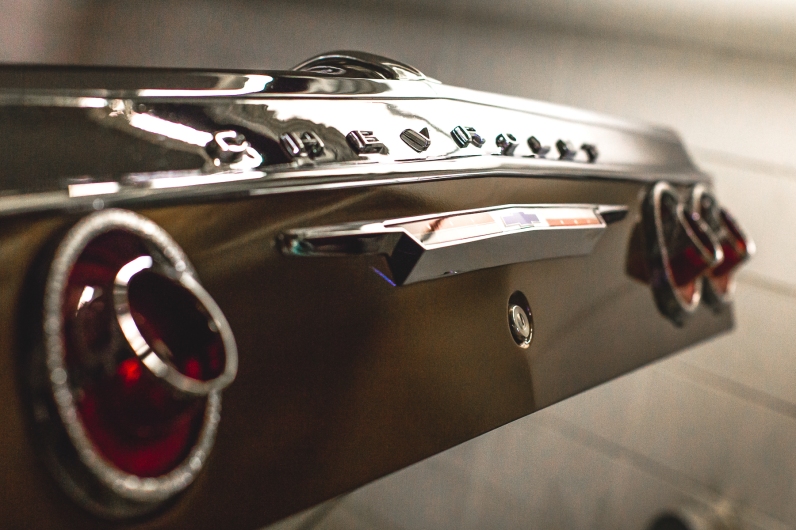 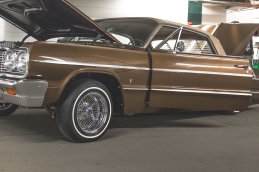 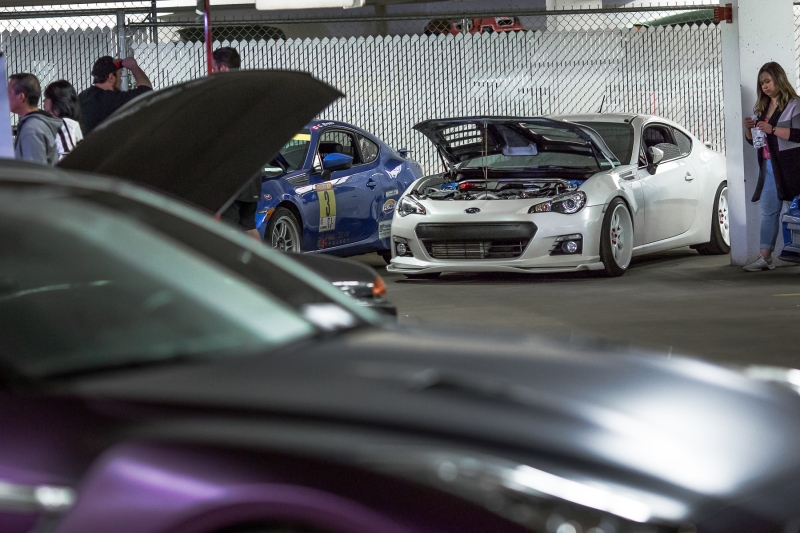 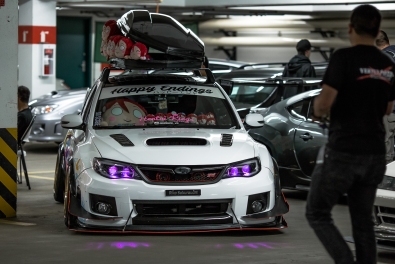 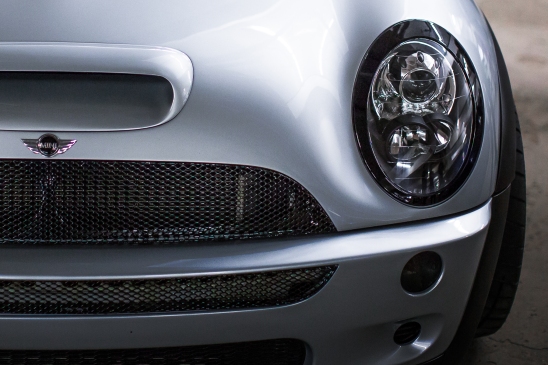 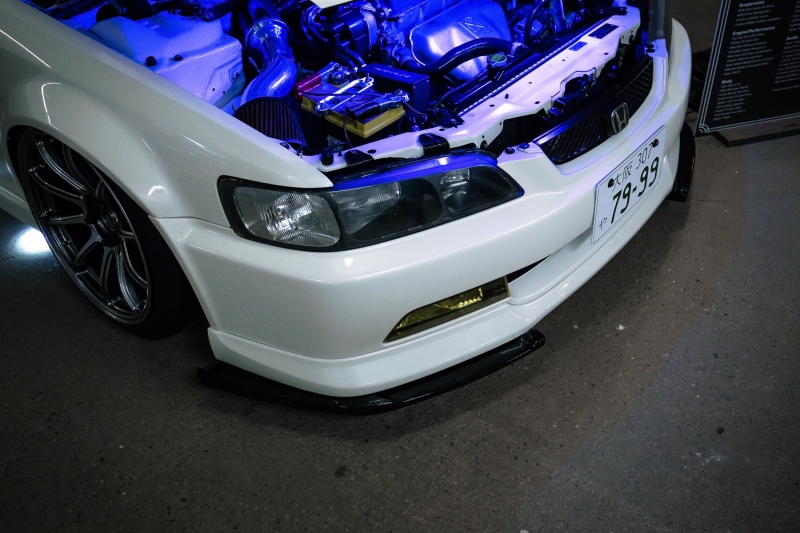 I will always say that a nice set of wheels can change the look of a vehicle whether they are concave or deep dish. Work Meister S1 3 piece were a popular setup alongside Advan GT’s and of course Volk TE37’s and Ce28’s. 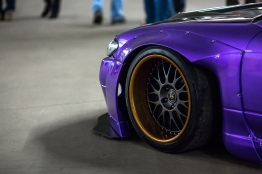 Part 2 is up next as some more feature cars from 2019 are showcased and the new RWB is unveiled, ready to make a statement on the streets of Edmonton.